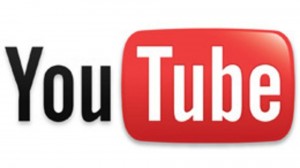 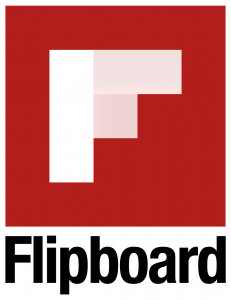 Flipboard is a great news-aggregator app for your smartphone. I used to get most of my news from the Pulse app (which was great for a while) but instantly converted to Flipboard once I started using it.

If you’re not familiar with news-aggregator apps, what they generally do is give you a visual feed from multiple sources (which you can choose) and let you easily read them from one app. For example, you could choose to receive the top stories from Cnn, Wall Street Journal, Mashable, or any number of news sites and have them aggregate on your phone. You can even include your social feed, so you can receive updates from your Facebook, Twitter, and Linkedin feeds.

What Flipboard does differently compared to other apps is its swiping. While Pulse and other apps do just as well at aggregating news feeds, the way you interact with your feed on Flipboard is much more elegant. For example, in Pulse you would scroll up and down your news feed, much like you would do on a computer.

Pulse screenshot from my iphone. 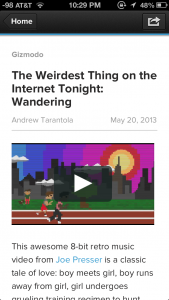 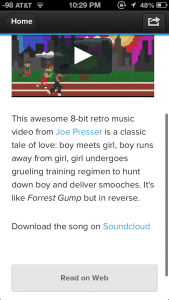 In contrast when you browse through your Flipboard feed, it’s much more like flipping through the pages of a book. Neat! 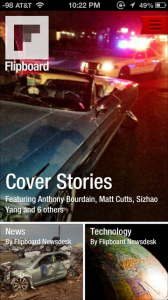 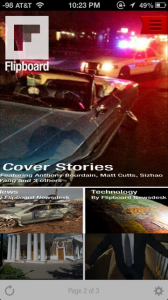 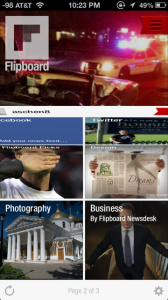 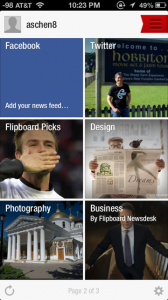 “‘Follow Your Passion’ is easily the worst advice you could
ever give or get … [I]f you have been able to have some
success, what was the key to the success? Was it the passion
or the effort you put in? …

Let me make this as clear as possible:

1. When you work hard at something you become good at
it.

2. When you become good at doing something, you will
enjoy it more.

3. When you enjoy doing something, there is a very good
chance you will become passionate or more passionate
about it.”

We all seek to success in our lives in one way or another. For many of us, the hard road to success is finding what venture to start, or what kind of business to get in to. I really liked what Mark had to say in this quote. It’s a great wake-up call for many people. The last part really stuck in my mind, about how your business, when you become good at it, will become your passion.

I found this quote while on Andrew Youderian’s website: ecommercefuel.com (it’s a great resource for budding entrepreneur’s looking into e-commerce). He analyzed this quote and had already applied it to his own life; one of his online ventures is selling boat motors, a topic which he initially had no knowledge in, but one that he became rapidly knowledgable and passionate about as he worked on his store.

He re-iterated Cuban’s idea in the following quote:

“When you’re successful at something, you naturally become
passionate about it. It’s how life works. I don’t care if it’s
water purifiers or cow manure; if it brings you success, I
PROMISE you’ll learn to become passionate about it at some
level.”

Time to work and make something successful. 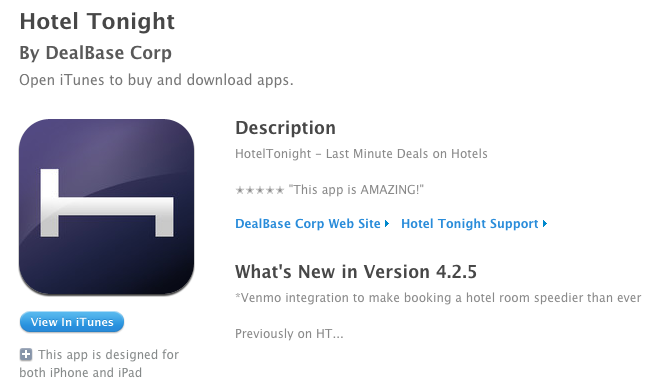 This week’s app is “Hotel Tonight” a free app from DealBase Corp. Hotel Tonight is a hotel finding app that helps you make hotel reservations at discounted rates.  What is interesting about this app is how it incentivizes its users to promote the app. Every user gets a promotion code, which they can share with their friends. Once a friend downloads the app and enters the promo code, both friends receive a $25 credit good towards a stay at any Hotel Tonight resort.

Here’s what the app looks like on the iPhone 5: 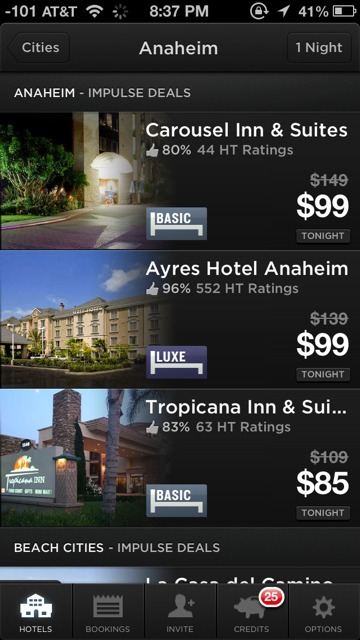 If you’d like to get $25 credit, please use my promo code

. After you download the app, you’ll receive your own code that you can use to share with friends and get more Hotel Tonight credit. You could get a free hotel stay for sharing with just 4 other people! 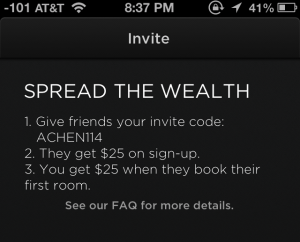 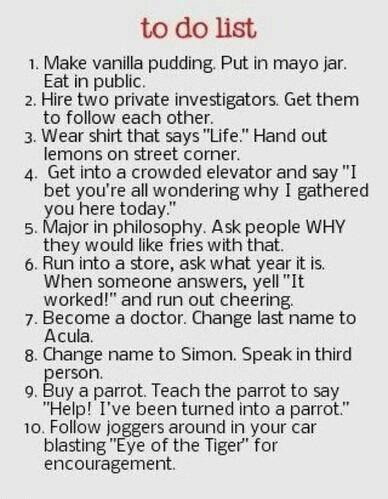 This is my first post on neat smartphone apps.  I’m going to start with a cool little number called ToDoist, here is the Apple link and the Android link

Todoist’s To Do list service helps organize your tasks across many platforms, from laptop to tablet to smartphone. The service includes the website and the app, and both are simple to use. For a free App it is great, I highly recommend it to anyone who needs help keeping track of their to do list. 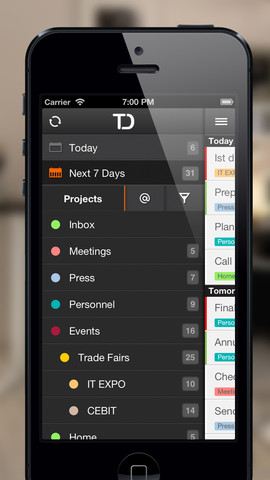 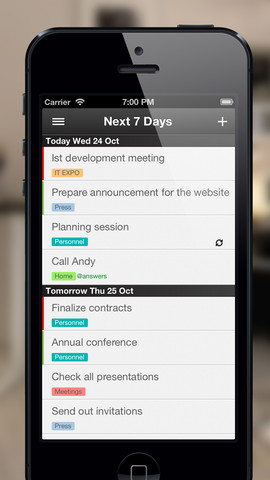 You can divide your to do’s into separate checklists, which ToDoist calls “Projects”, within each project you can assign a number of tasks. After you complete a task, you can check the box next to it, and it will disappear from your list.

One of the neat things about ToDoist is that you can track your progress and productivity over time. ToDoist remembers what tasks you completed on what day, and compiles a productivity chart that you can view, called ToDoist Karma (this screenshot was taken from the ToDoist browser app).

The below is a screenshot of my productivity graph that ToDoist emailed me: 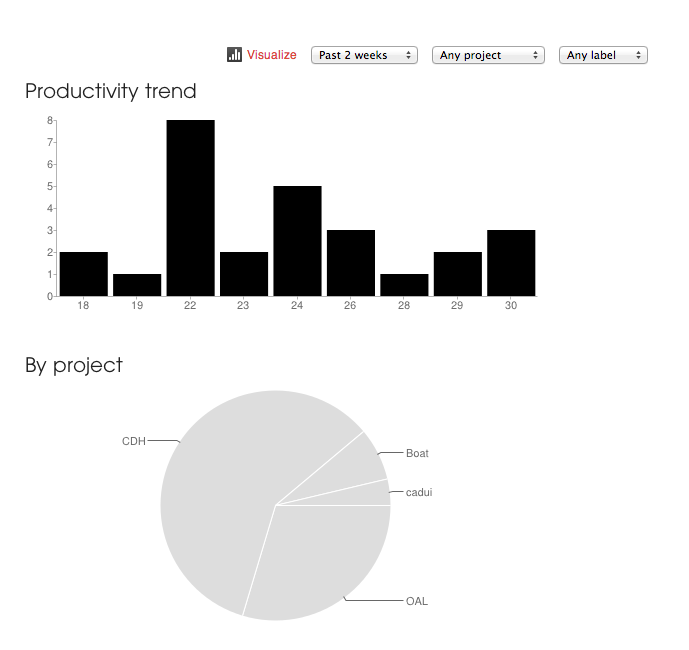 Make sure to check it out!

If you were a fan of Yahoo! Answers, you need to check out

For those of you who have never heard of Quora, it is a Q&A site (founded by former Facebook employees) that aggregates questions and answers based on topics. Users can collaborate by editing questions and suggesting edits to other users’ answers.

So why should you be on Quora?

1. Quora users are REAL PEOPLE.  Unlike Yahoo!Answers, Quora users identify themselves with their real name and picture. Accountability has a great way of keeping conversations civilized, it is rare to see on Quora the kind of vitriol you’d normally see in Yahoo!Answers or in the comment section of Youtube.

But wait, doesn’t forcing users to use their real name pressure users to focus only on PC topics

After all, few people would be comfortable with asking politically/racially/culturally sensitive questions for fear of reprisals from bosses or coworkers that may be on Quora. There are also very personal questions that users may feel uncomfortable answering in public, but are willing to answer anonymously (What does it feel like to steal? etc.)  Fortunately for this very reason, you can both post and answer questions anonymously.  This allows users to open up and post very personal answers that they wouldn’t feel comfortable posting publicly.

2. Quora has a great validation system.   Answers can be voted up or down, with highly rated answers appearing at the top of the answers list.  Other users can validate a great answer.

3. Quora has a “Get and Give” policy. Asking questions on Quora requires the use of in-site credits, which users can earn by answering questions. This policy ensures that Quora users all contribute to discussions on Quora, and are not simply spamming the site with questions.

4. The influencers are on Quora.  Influencers in SEM, SMM, SEO, Law, Politics, Biology and many other fields are on Quora. I find the site a great way to find authorities on subjects that I’d like to find out more about. For example, I recently posted a question on Quora regarding Chinese language, and received this great answer from a language student

5. You can ask questions about key influencers and sometimes they will answer your question! 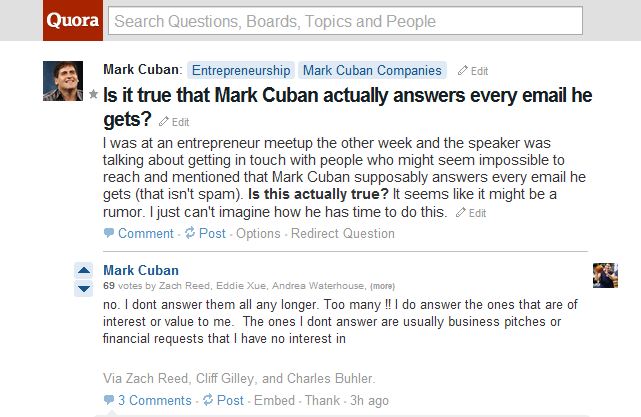 Why did the hipster get burned by his coffee?

…he drank it before it was cool 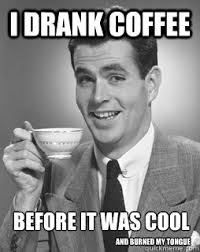 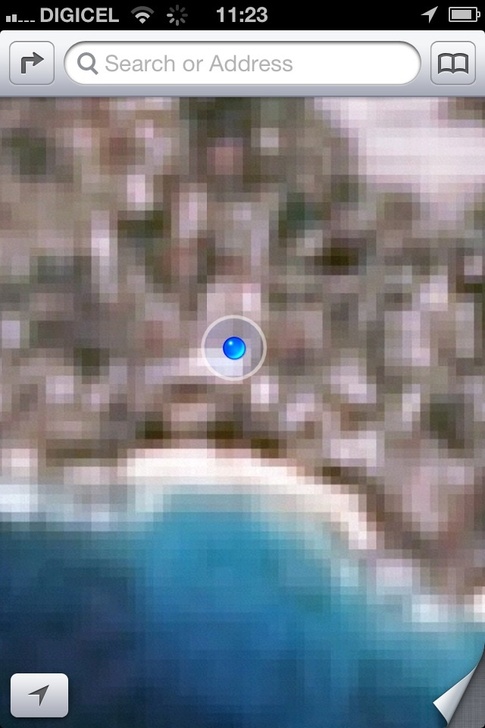 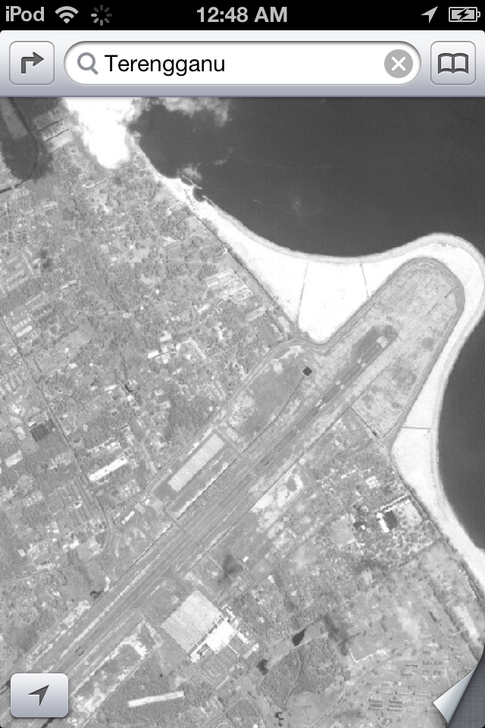 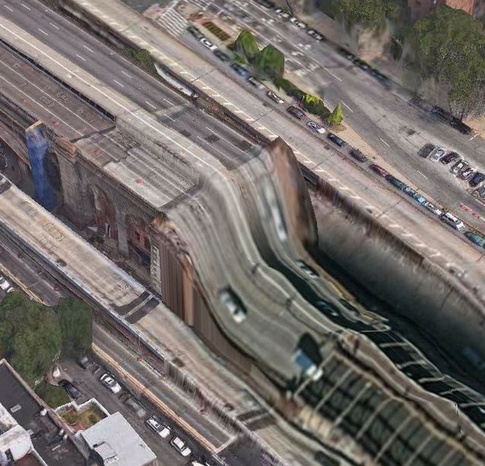